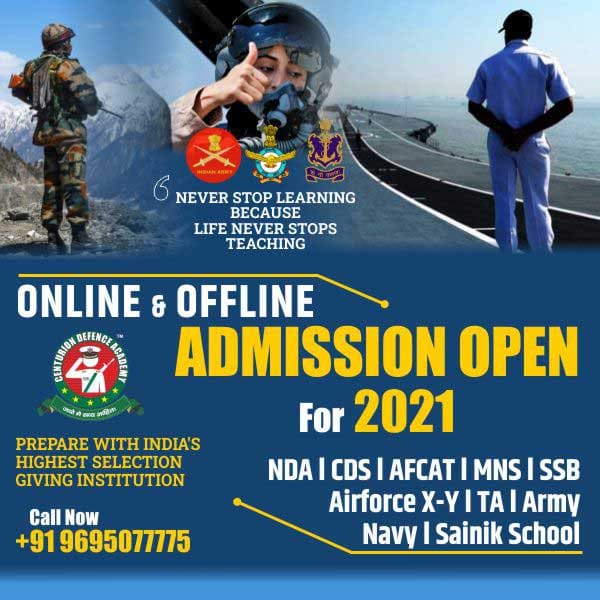 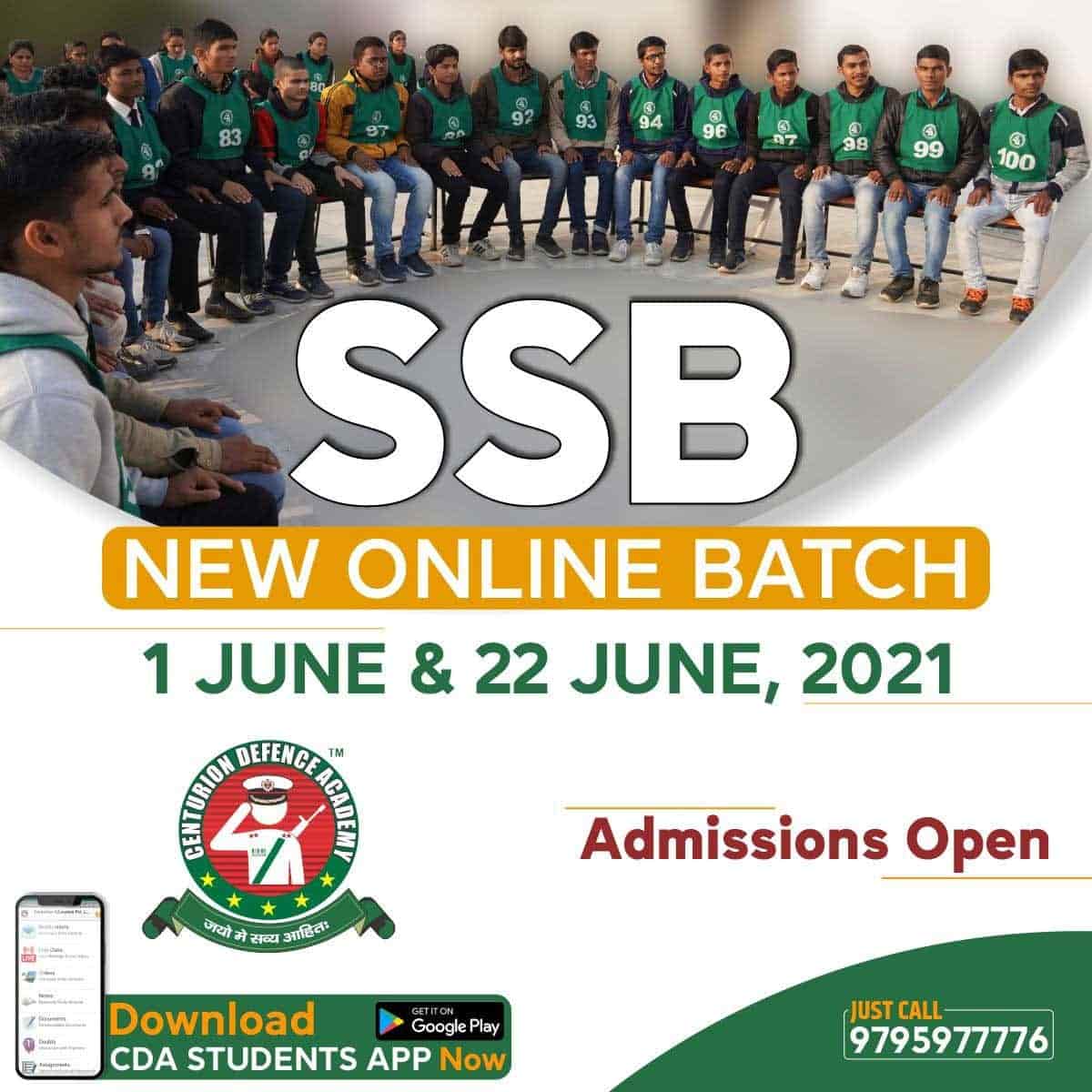 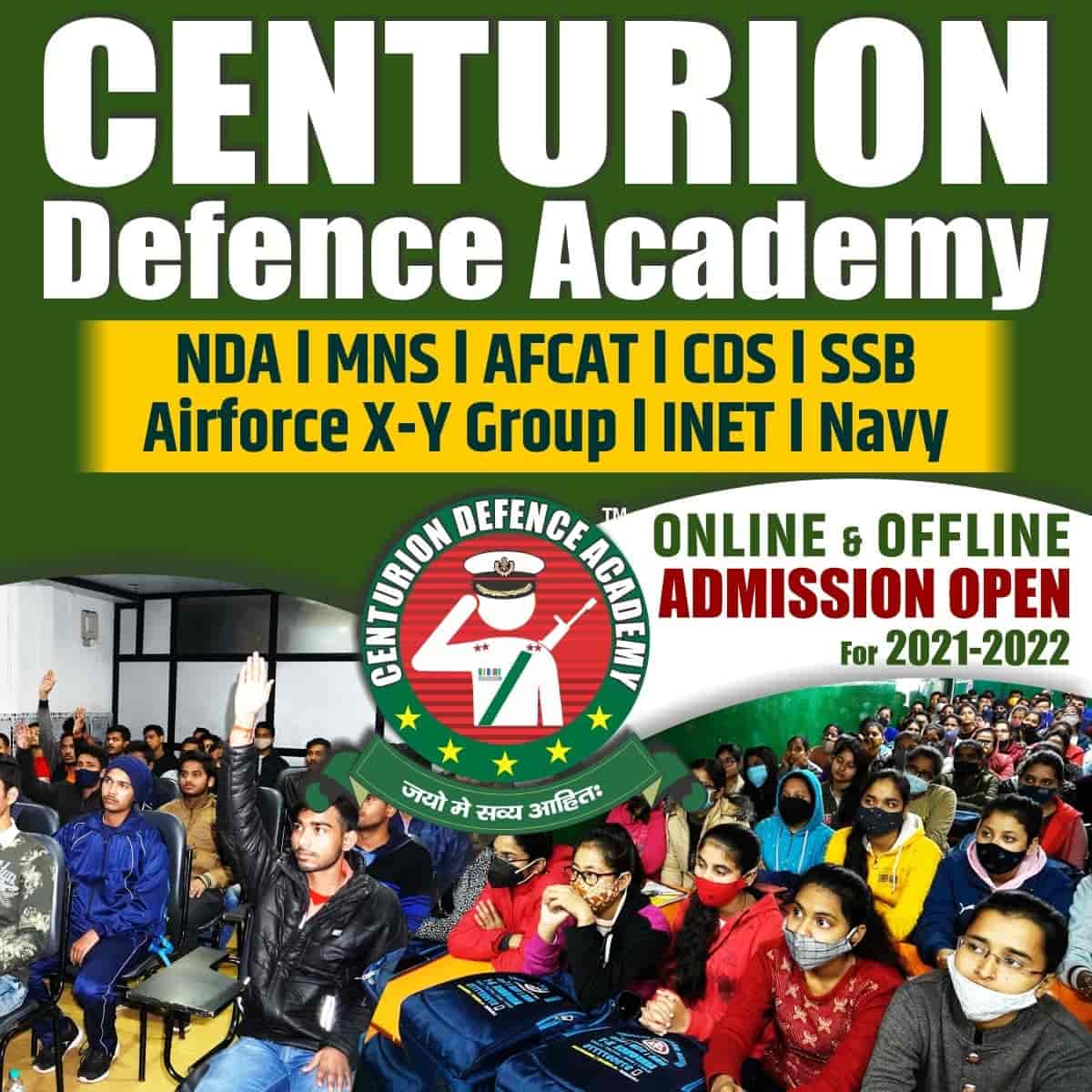 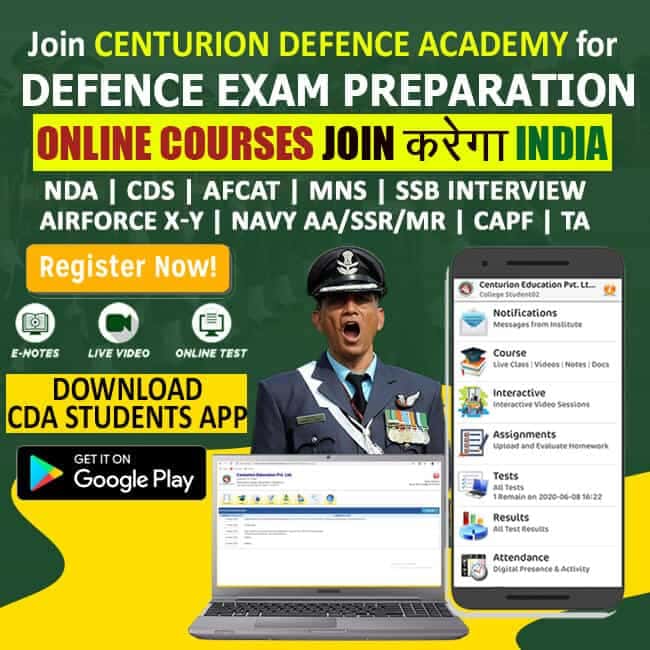 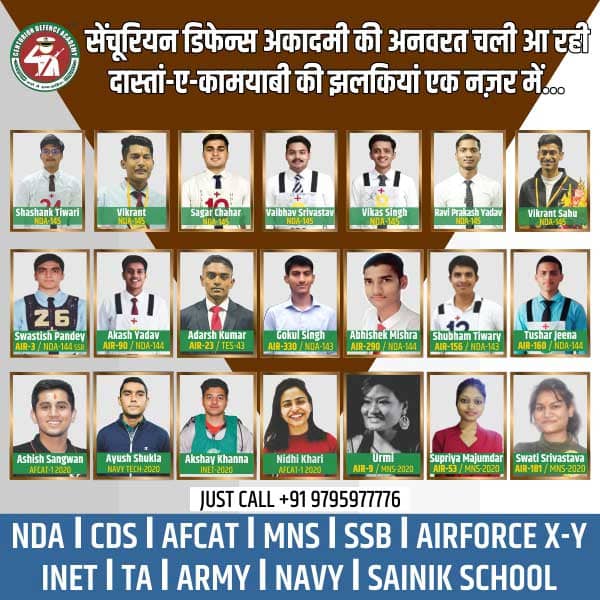 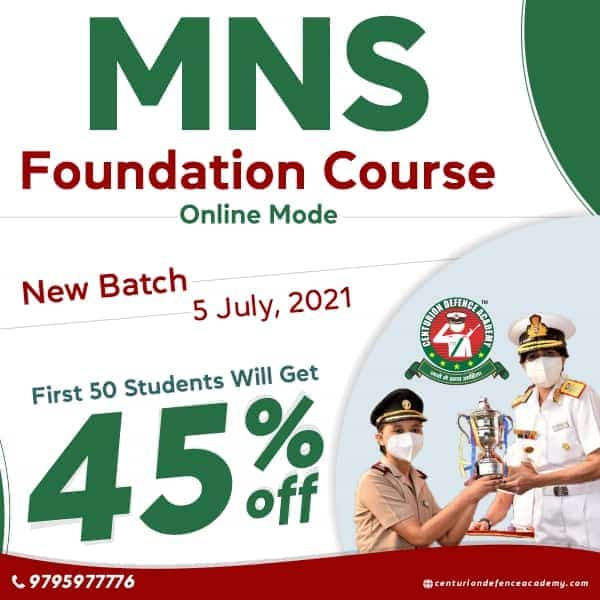 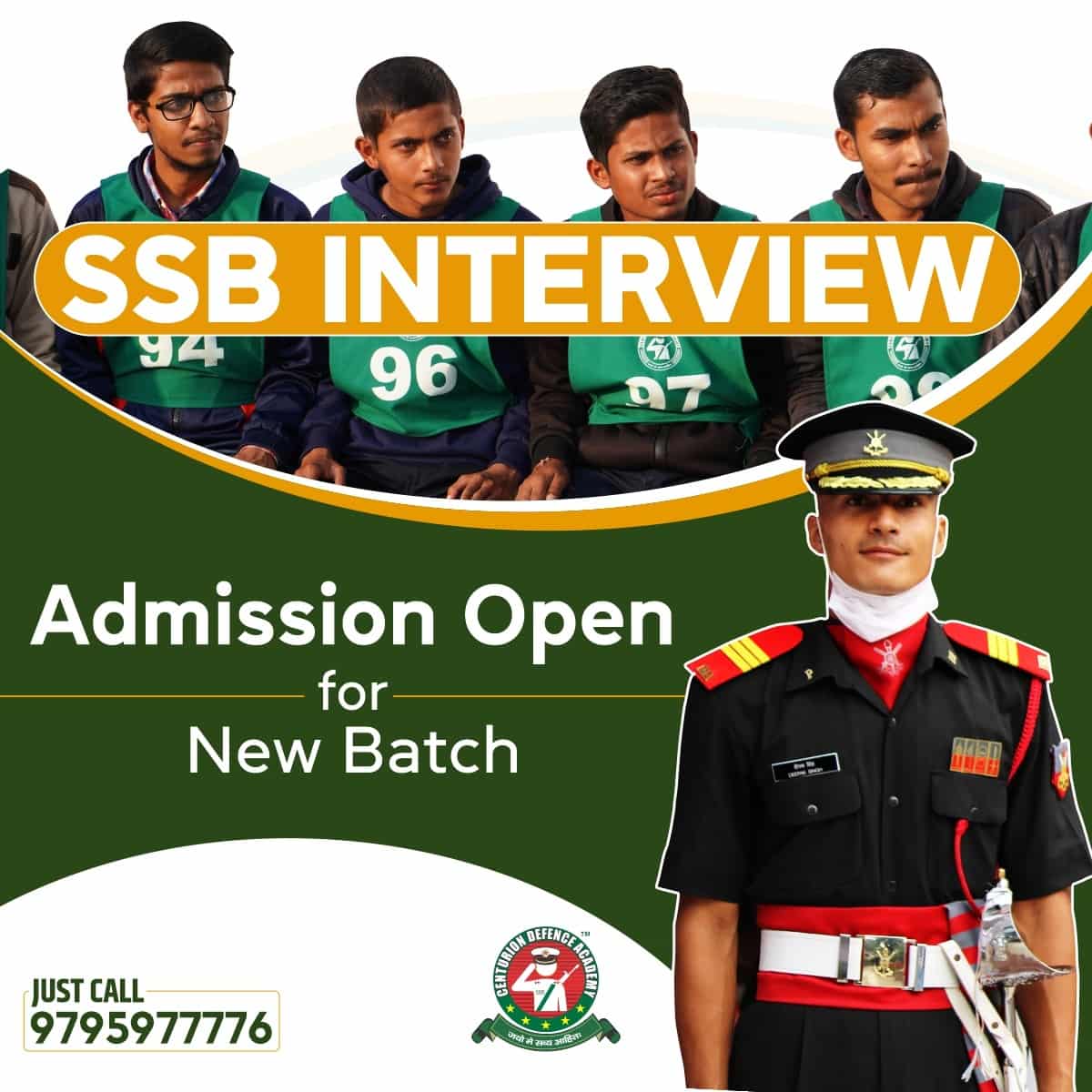 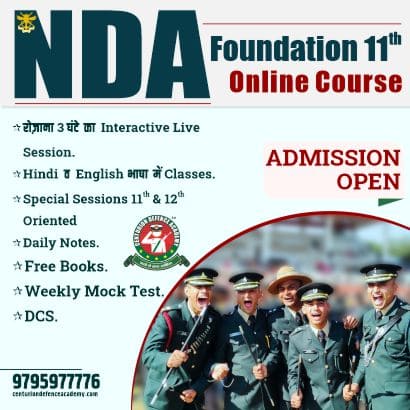 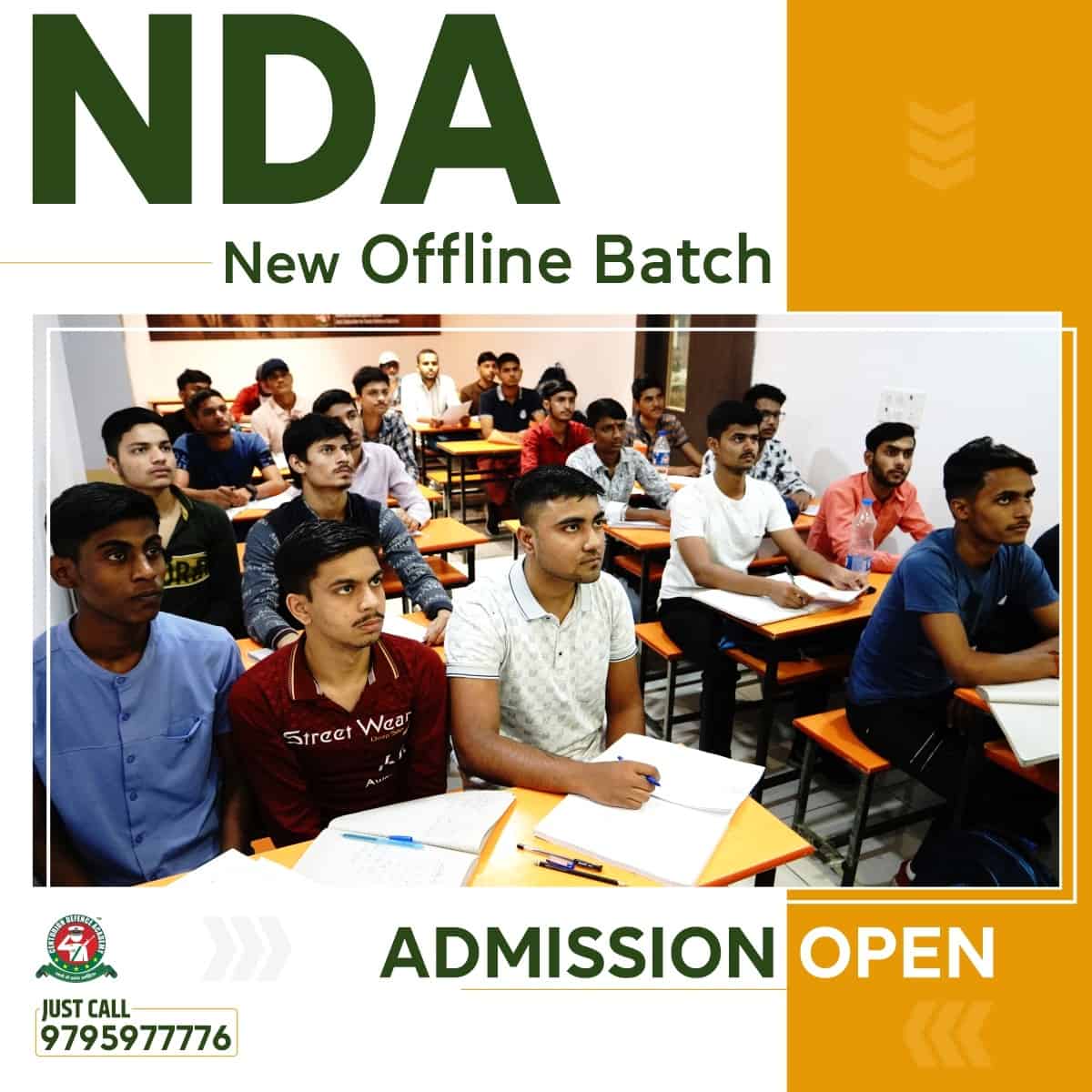 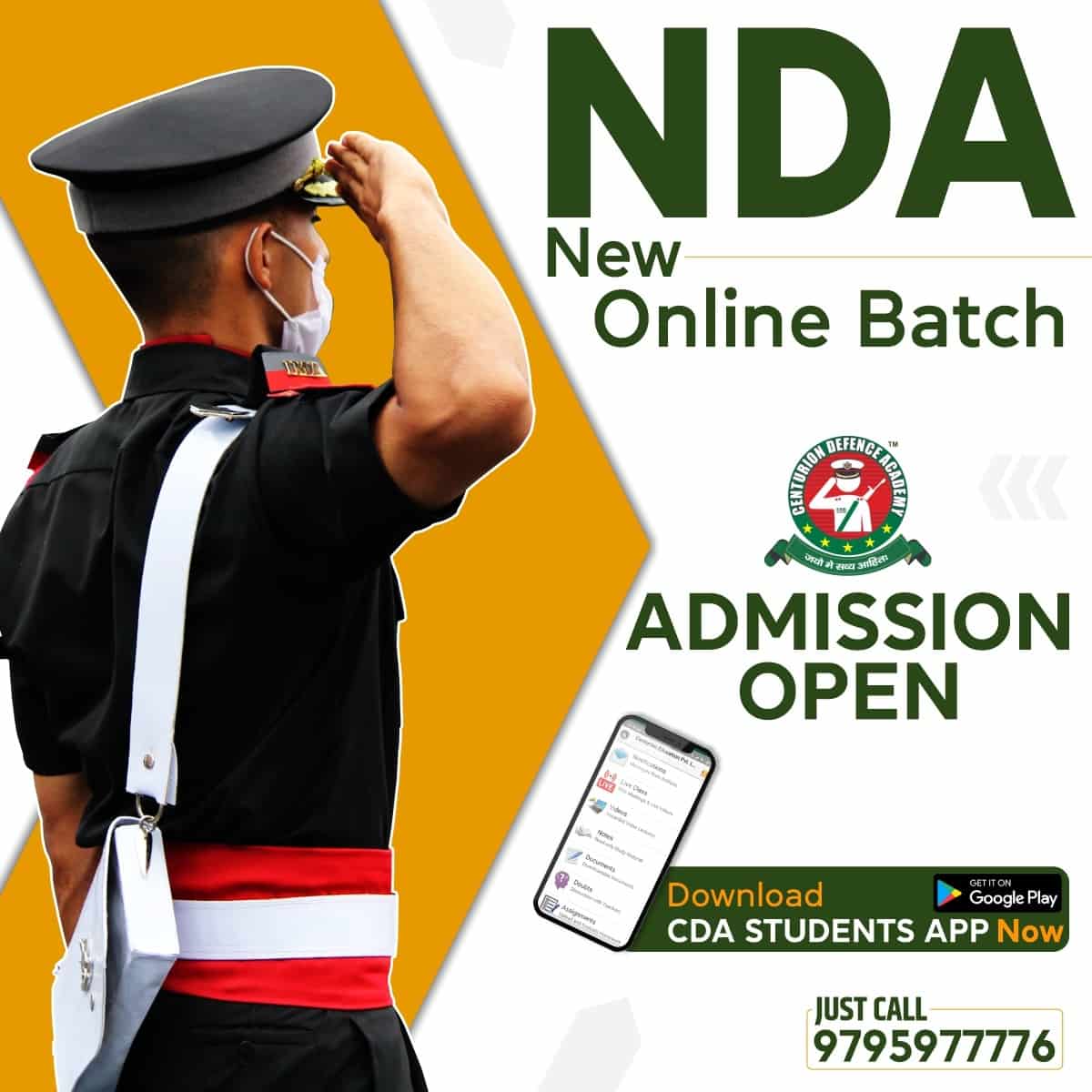 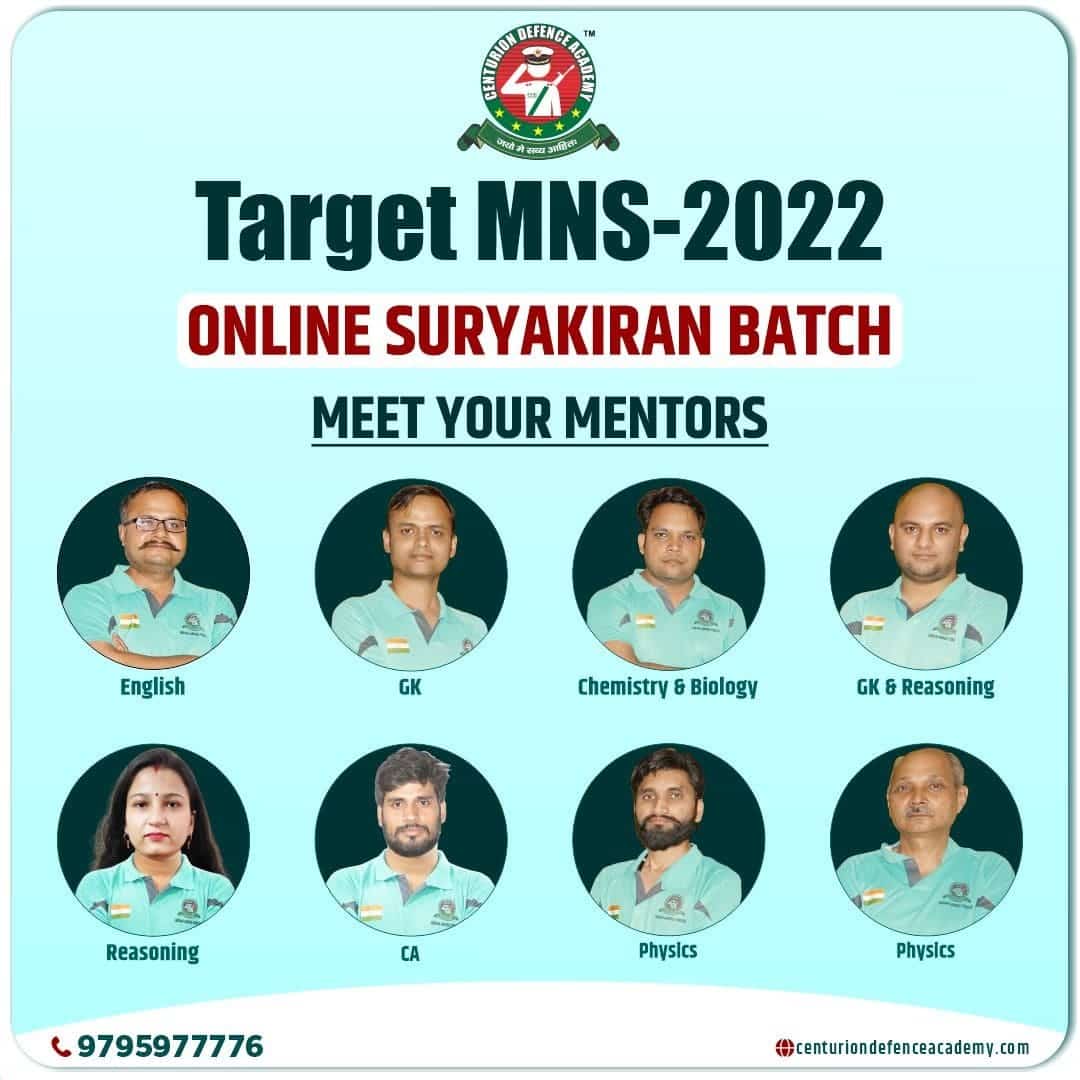 ( Suryakiran Batch )
To make a register.
Join with us! 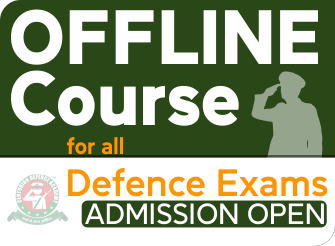 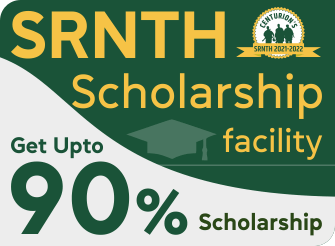 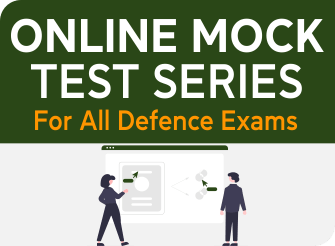 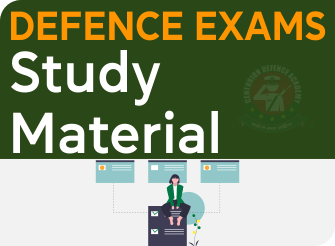 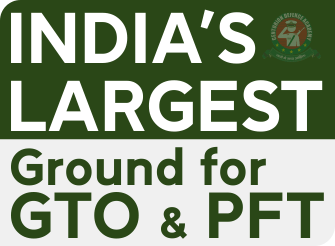 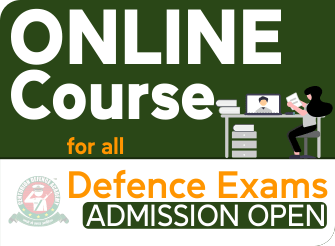 Centurion Defence Academy is the Best NDA Coaching in Lucknow, India provides Online/offline classes for NDA Coaching. We offer CDS Coaching, AFCAT Coaching, Airforce Coaching, MNS Coaching, SSB Coaching for all defence aspirants. We are the Best defence career training coaching Institute in India, Located in Lucknow where you'll prepare with the best Defence Experts for the NDA Written Exam and SSB Interview on an Online and Offline medium. We focus on Defence Coaching classes and foster the event of the potential aspirant on all aspects including NDA Exam, CDS Exam, MNS Exam, Airforce & AFCAT Written exam, SSB Interview and take all the responsibilities of the candidate to realize his dream goal. If you would like to achieve a better rank and crack the exam then come and join Centurion Defence Academy. We are a Best Defence Coaching in Lucknow able to serve with offline campus and that we are a Best NDA Coaching across India able to serve with 24/7 online medium. Join our NDA and MNS foundation course and prepared for Indian Defence Services Exam. We are running many batches for foundation courses of all streams. We provide top classes for NDA course, SSB Interview course, CDS course, AFCAT course, MNS course, CAPF course, AirForce X-Y Group course. We also provide the best coaching classes for Army, Navy, Territorial Army, Merchant Navy, ACC, INET and other Defence exams.

Join our MNS foundation course and get prepared

We provide classes for the preparation of AFCAT

We are best coaching Institute for INET Exam

“My success undoubtedly helms and is very evidently defined by the experience I had at Centurion as the unmatched guidance, expertise and support I was fostered here has definitely helped me to crack my NDA in my very first attempt. Kudos to the team work and hard work of the entire faculty of professionals.”

“No matter how many attempts, the firm belief and individual guidance strategy the institute fosters upon its students is definitely worthy. It took me four attempts but like a pillar Team Centurion was always there for me. The guidance of the experts at Centurion and my determination helped me crack my SSB.”

“Centurion- The one stop destination for any defence aspirant as this Academy is unparallel with best of the learning material and guidance all available under one roof. For gaining a life changing experience with inheriting the best of knowledge, Come, join CDA and give your dreams a vision and be a force to reckon with.”

“Centurion’s able and expert guidance translated my vision into reality. This institute really works wonders and if you really want to prove your worth and want to be recommended then just without thinking even once just come and join Centurion as I did.”

“The life changing experience and journey this Academy gave me was really awesome. The entire process and journey over here made me feel like being actually turned into an Army Officer. Teachers and Counselors are excellent here, guiding at each step and I find this to be the best NDA and SSB Coaching.”

“How, Where and What to study and start”, all the questions have their answers at Centurion. Whenever you are looking for success think of no other name other than Centurion. Having qualified my MNS under the able and experienced guidance of the experts at Centurion made me achieve the wings of my dream”

“The way to get started and begin for SSB Interview was very well guided to me by Centurion Defence Academy. My trust was built and accomplished by Centurion,for all the aspirants the only coaching for success I personally recommend is Centurion.”

“How to start and from where to get start? Centurion is the answer I got when I was looking for success. I have qualified SSB Interview under the guidance of the experienced experts around Lucknow at Centurion. ”

“This was my first attempt and my reliance on Centurion paved my way to be a Future Pilot of Indian Air Force. Like me set your goal and dream with Centurion, this academy can nurture any ordinary boy with extraordinary dreams.”

“A possible life-changing outcome is witnessed by me with Centurion. My success is very well defined in my experience I had in Centurion. A special thanks to Shishir Sir for his guidance and support in helping me to crack INET.”

“The experience in this academy is awesome.It feels like you are actually being converted into an officer. Teachers are excellent and I find this to be the best NDA and SSB coaching.”

“I have taken 6 months training at Centurion Academy and I have joined IAF (Indian Air Force).”

“This Academy can nurture any ordinary boy for officer cadre like me in first attempt.”

“Thankyou Centurion Defence Academy which help me to crack NDA Exam in my first attempt.”

“When you are looking for guidance “What to do, How to do” the only name i will prefer is Centurion Defence Academy.”

“Very good and glad to be a part of it. It acts like an integral part of my career building.”

“I got selected from this academy. They thought me what I actually needed. Lesson plan and administration of this academy is very high.”

“I had a great experience while learning .Well experienced facilities…Thank you so much for guiding me.Best NDA coaching in Lucknow, India.”

“I will surely recommend other candidates to join Centurion academy. My experience is very good specially thanks to teaching staff.”

“Centurion translated my vision into reality and led it by going to SSB Interview and making my recommendation into reality in Navy Tech. If you are willing to get recommended then come and join Centurion as I did.”

“Everything is possible with Centurion I got selected from this academy, the best NDA coaching in Lucknow. All the aspiring candidates without wasting their time should come and join Centurion.”

“It took 6 attempts, but Team Centurion was always there.Big and small tasks all performed and practiced under supervision of Centurion experts and my determination helped me to crack SSB.”

“Start with a clear vision of your ideal aim to crack for SSB Interview, then work backward to achieve it with Centurion. Teachers are excellent here and I find this to be the best NDA and SSB Coaching.”

Centurion Defence Academy is one among the best coaching for NDA, CDS, MNS, Airforce & AFCAT exams with Online and Offline platforms in Lucknow, India. We offer the best coaching classes for NDA, CDS, AFCAT, Airforce, MNS, SSB’s Psychological Tests and Interview Tips. We also provide #1 coaching classes for several other competitive exams like Navy SSR, CAPF, Military Schools, Sainik Schools, Women Military Police, etc. We are providing quality education to all the aspirants and guide the students to create their initiative towards their dreams of getting commissioned in defense services. We always need to constantly evolve to stay up with the days, implement the highest standards of teaching and seek perfection in everything we do. We have a team of professional teachers who are highly experienced in defence field. We look at various aspects of aspirants and train them to bring best in order that they may commence with flying colors. That makes us the best defence coaching in India.

As the spread of coronavirus is gradually decreasing, Centurion Defence Academy is back again with its offline classes to help defence aspirants in their exam preparation with a more interactive and versatile approach. Offline Admission 2021 new batch started With the establishment of North India’s largest GTO ground to provide extensive training facilities for SSB, […]

UPSC Released National Defence Academy and Naval Academy Examination (I), 2021 Written Results. Heartiest congratulations to all NDA aspirants who have qualified NDA-1 2021 examination and added feathers of success to Centurion’s crown. During this pandemic also, students kept their preparation tuned under the guidance of Team Centurion. Their hard work paid them off with […]

Success Story of Vikrant Sahu Marking another feather in the victory cap and boasting yet another millennial of success Centurion Defence Academy this year has again outshone and come up as the prestigious institute barring and conquering all the odds, boasting  its string of umpteen successful selections, a young lad from the Centurion group Vikrant […]

Centurion Defence Academy, a Brand powerhouse in itself and a name to reckon in the Defence Educational arena is undoubtedly recognized as the premium coaching for NDA in Lucknow. Itendows and encourages the students to prepare for the Entrance Exam as well as for Interviews with a decisive, smart, practical, holistic and pragmatic approach which […]

As a premier Coaching institute for defence exams preparation in Lucknow, India, we believe that our traits are our hallmarks of strength and success.